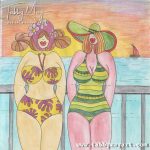 Summer time, always a time of happy cheer and fun. Well, not always… For the ladies in the coloring page on the left, that summerly sunset is the end of a lovely day, promising for the next day to be another great day. At least, that’s my interpretation 😉

In case you’re interested, this is a drawing made by Julia Woning from her book ‘Dikke Dames Zomertijd’. I started coloring this page back in 2018 when the book was newly released. Somehow I just never got to finishing it, so that’s what I did last week during a hot summer day.

The way I colored this drawing, as a summerly sunset, made me think of the next part of our love story*, which I promised to tell in the next blog post. Well, this is that post, the story continues here!

The young couple was sooo in love. Although they didn’t openly express it to each other, they sure did feel and know it. They were way too shy to tell their true feelings to one another, they were even too afraid to kiss or hold hands. Nothing of the sort happened.

They just loved to walk together and chitchat about anything, or go for a swim in the local swimming pool, together with her little sisters or one of his friends.

One time they did speak about the future… She spoke about the religion she grew up in, a cult like group (of course she didn’t look at it like that at the time!), which forbade people to be living together unmarried. She wanted to know how he felt about that. To her surprise he said that he would marry her if living together wasn’t an option.

Gosh, they were so sweet, so in love and they saw nothing but summer and sunshine. Little did they know that their ‘summer of love’ was about to be disrupted by a horrible storm. Their figurative summerly sunset had, unbeknownst to them, begun.

Love versus bigotry and prejudice

As mentioned she grew up in a cult like religion. A religion that wants to determine what you think, who your friends are, how you raise your children, what you can and can’t do in the marital bed, they want to totally determine how you live your life. One hundred percent!

For the religion he had to become one of them, or else he would be just a ‘worldly person, ready to be destroyed in the great war of God Almighty, ‘Armageddon”. And that was exactly the way her parents looked at him. Unfit for their daughter, bad association. In their minds he was just going after their daughter for sex and nothing else.

She tried to tell them that he was not at all what they thought of him, but they didn’t want to listen. He was bad, she had to be protected from him. He needed to go and stay out of her life. Period.

By that time school had ended and she would start in a job at an office after the summer holiday. How convenient for her parents. They forbade her to ever see her boyfriend again. Her father called the boy for a ‘conversation’ at their home in the morning, which turned out to be a lecture. He told him to let go of their daughter and never contact her again.

Added to that, her father promised his daughter to break both her legs if she would go against his command. After the beatings she had already received from him, when her parents discovered her love for this ‘worldly’ young man, she really believed he would break her legs, or worse, if she wouldn’t obey him.

Her father ordered her to give back everything the boy gave her. He’d given her a few cassette tapes and his passport photo. She secretly kept one cassette, with half an hour of music mixed together that he had made especially for her. She also kept all of his letters. But with pain in her heart she gave him back the rest, plus his passport photo.

Sadly enough that afternoon there was a talent show at their school. And she had signed up to perform together with another guitar playing school friend. They would sing the ultimate love song, John Denver’s ‘Annie’s Song’, and she had planned to sing it for her boyfriend.

But when she went to school, she felt like there were stones in her heart, because when she left home her boyfriend was still sitting there being lectured by her father. She knew she had lost him. Forever.

With tears in her eyes and voice, she sang her part of Annie’s Song, wishing that things would have been different than the harsh reality that she suddenly found herself in. If only he could hear her… but she was certain that his heart was as broken as hers, and that he would never go to listen to her at that talent show.

Nevertheless, she still sang it for him. And she and her guitar playing school friend were the runner-up in the contest. Losing or winning that contest, it was all the same to her. She had just lost what she knew in her heart was the love of her life.

After a couple of days, that she mainly spent crying in her bedroom, one feeling kept coming back: she regretted giving his passport photo back! All she had left was the class photo of their year together in the same class, but his face wasn’t as clear as it was on that passport photo.

Then one day not long after, when she was alone walking past shops in the shopping center of their town, she saw him, walking towards her with some of his friends! She took a deep breath and didn’t think twice.

She walked up to him and only asked: “Do you still have your passport picture on you that I gave back?”

He looked at her and nodded ‘yes’.

“Can I please have it back?” she asked.

He put his hand into the inner pocket of his jacket to reach for it and pulled it out of there. Then he gave it to her. Their eyes showed love and hurt, intimately entwined. Then she remembered her father’s evil promise and she left. She was afraid that someone would see them standing together and that her father would get wind of it.

Obviously this story didn’t end here. After all, it is MY story, and my husband’s! Wanna know what happened to ‘break the curse’? I’ll tell you in a next blog!

Below you’ll find a video, with a recent (August 2020) recording Maurice and I made of me singing Annie’s Song. The video contains not only the song, but also some images that accompany the story above, including that passport photo of Maurice.

And the passport photo he received from me back then (which he burned by the way, together with my letters, after he was called off by my father and felt so terribly hurt. Luckily I still had another one haha).

Let me know in the comments what you think of our story, and of my version of Annie’s Song!

Thanks for reading, if you’ve made it this far, and till the next one.

Please SHARE it with the world on your socials!

Because I’m no longer active on social media and I want to let you know when I’ve uploaded a new post.

It’s free, it’s fast, and you’ll never miss anything from my website.

And of course you can always unfollow again if you have a change of heart later on.

Because I’m no longer active on social media and this is the perfect way to reach you fast whenever I’ve uploaded a new post!

It’s free, it’s anonymous and you can easily subscribe (and unsubscribe again if you want to).
MORE INFO!
Get FREE Weekly Updates

Please fill in your first name + best email address
and hit the button below.
Signing up is safe and secure. We do not send spam and you can always unsubscribe with 1 click.
Your data will never be shared with others.